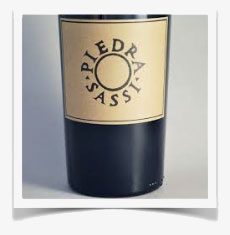 the people
Winemaker Sashi Moorman, along with co-owner Peter Hunken, founded Santa Barbara county – based Piedrasassi in 2003 and has operated it ever since. In fact, Moorman has his hands in several projects: he’s also the wine maker for Stolpman Vineyards, and in 2010 Moorman and top sommelier Rajat Parr set up Sandhi Wines. And, to top it all off, he and wife operate a small bakery – using wheat from their own farm!

the wine
According to the winery, “The focus of Piedrasassi’s wine program is cool-climate syrah.” Fantastic Syrah is made throughout Santa Barbara County, but Moorman believes the most compelling expressions of the versatile grape are grown in cooler pockets, where they produce “the most complex aromas, the most savory textures.”

the region – Santa Barbara County
Most of the California coastline run north-south, but it takes an east-west turn in Santa Barbara County. The valleys and hills also follow this lateral direction, helping to funnel inland the cooling ocean breezes. Heading eastward into the foothills of the Santa Ynez and the San Rafael mountain ranges the temperatures are warm during the day and cool during the night, while vineyards towards the western ocean coast have a more mild and moderate climate. Chardonnay grows well throughout all the regions, while Syrah prefers the inland climates, and Pinot Noir thrives in the Santa Maria Valley. At this time there are 5 AVA’s within Santa Barbara County: Ballard Canyon, Happy Canyon of Santa Barbara, Santa Maria Valley, Sta. Rita Hills and Santa Ynez Valley. (Piedrasassi’s vineyards are located in Ballard Canyon in the east to the Santa Rita Hills and Arroyo Grande in the west.)

critics review
“This is another impressive set of wines from Piedrasassi and [Sashi] Moorman. Readers who can find the wines, should not hesitate, as they are terrific and full of personality. The 2012 Syrah Santa Barbara County is full of vintage 2012 radiance and juiciness. Dark red and black plums, menthol, spices and new leather flesh out in the glass. The style is juicy, immediate and full of near-term potential.” 91-93 points, Antonio Galloni